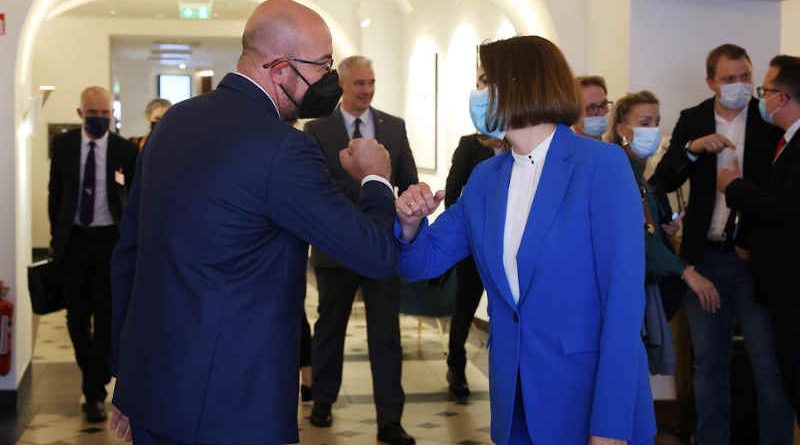 In a setback to the Lukashenko’s regime, Lithuania has recognized Tikhanovskaya’s office as the official representation of the Belarusian democracy.

A court in Belarus has decreed to send a top opposition leader Viktor Babariko to jail for 14 years after convicting him on corruption charges which are believed to be fabricated.

Babariko, 57, was arrested in June 2020 just before the presidential election, as he was the main rival of President Alexander Lukashenko in the polls that took place in August last year.

It is largely believed that Lukashenko rigged the election to stay in power while the European leaders and the opposition have rejected his government. Lukashenko – supported by Russia – has been holding power since 1994.

Although Lukashenko has denied election fraud, people in Belarus have been protesting to get Lukashenko removed and the election held again in a free atmosphere. The court ruling on July 5 is believed to thwart Babariko’s attempt to challenge dictator Lukashenko.

Viktar Babaryka is sentenced to 14 years in a high-security colony by the Lukashenka’s cronies. 14 years for believing in Belarus. 14 years for awakening belarusians. I believe he wont serve the term – we will release all political prisoners as soon as possible. pic.twitter.com/m5atSHR2FY

Franak Viačorka, an adviser to the exiled Belarusian opposition leader Svetlana Tikhanovskaya, said that Babariko is sentenced to 14 years in a high-security colony by the Lukashenko’s cronies. In his tweet, he hoped that Babariko would soon be released.

The imprisonment of Babariko has come close on the heels of the house arrest of Raman Pratasevich, a Belarusian journalist charged with inciting unrest in Belarus, and his Russian girlfriend Sofia Sapegahas.

In August 2020 during post-election protests, over 30,000 people in Belarus were arbitrarily detained and there were hundreds of complaints of torture and ill treatment. Many of those detained are now being sentenced to years in prison for peacefully showing their dissent.

Meanwhile, in a setback to the Lukashenko’s regime, Lithuania has recognized Tikhanovskaya’s office as the official representation of the Belarusian democracy. This is the beginning of a new process to delegitimize Lukashenko’s government.

According to Tikhanovskaya’s office, Lithuania has launched a new stage in the delegitimization of the Lukashenko’s regime. This is the first EU country to take this step, and work is already underway to open representations of the people of Belarus in other countries.

The #EU stands firmly with the people of #Belarus and will continue to do so.

The legitimate call for a democratic future and respect for fundamental freedoms and human rights must finally be heeded. pic.twitter.com/DyTB6iBfUw

The EU has extended its support to the people of Belarus. Charles Michel, President of the European Council, tweeted today (July 6) that the EU stands firmly with the people of Belarus and will continue to do so. He added that the legitimate call for a democratic future and respect for fundamental freedoms and human rights must finally be heeded.