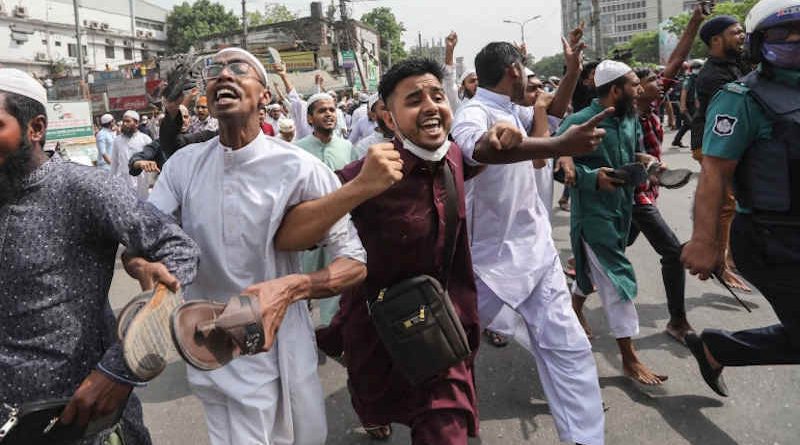 In the past couple of years, Modi and his government have taken a number of hostile steps to oppress Muslims in India.

Protesters waved their shoes as a sign of disrespect to India’s Prime Minister Narendra Modi, who is on a 2-day visit (March 26-27) to Bangladesh to attend its Golden Jubilee celebrations of independence.

Reports reveal that at least four people were killed in the Bangladeshi city of Chittagong after police fired at protesters during the demonstration against Modi. In Chittagong, according to Reuters, thousands of supporters of an Islamist group that accuses Modi of alienating minority Muslims in India protested against his visit.

It is largely believed in most parts of the world that Hindu PM Modi and his belligerent colleagues in Bharatiya Janata Party (BJP) are persecuting nearly 250 million Indian Muslims, as Modi has pledged to make India a Hindu Rashtra (a nation only for people who belong to the Hindu religion).

As a result of Modi’s discriminatory and authoritarian actions, India has already lost its status of democracy. The Democracy Report 2021 from the V-Dem Institute reveals that India has lost its status as an electoral democracy, as the Modi government is imposing various restrictions on multiple facets of democracy such as civil society and free speech.

The V-Dem report – released in March – adds that Modi led his BJP to victory in India’s 2014 elections and most of the decline occurred following BJP’s victory and their promotion of a Hindu-nationalist agenda.

In the past couple of years, Modi and his government have taken a number of hostile steps to oppress Muslims in India. These include construction of a large Hindu temple after demolishing a Muslim mosque in Ayodhya, introduction of Citizenship Amendment Act (CAA) against Muslims, and the abolition of Article 370 in Kashmir to deprive Muslims of their rights.

According to an Al Jazeera report, it was the latest in a series of protests held across Bangladesh to oppose the visit by Modi, who many Bangladeshis accuse of stoking religious tensions and persecuting Muslims in India.

The report adds that at another protest outside Baitul Mokarram mosque a week ago, protesters said more than 1,000 people, most of them Muslims, were killed in the Indian state of Gujarat in 2002, when Modi was the chief minister.

After the Gujarat massacre in 2002, the U.S. had banned Modi’s entry and canceled his visa, as Modi was held responsible for large scale violence in Gujarat, although complicit Indian courts exonerated Modi.

At the protest outside Baitul Mukarram mosque, according to the Al Jazeera report, protesters slammed Modi for “killing Muslims in Gujarat, Kashmir, Delhi, and other parts of India”. They took their shoes in their hands to show disrespect to the Indian Prime Minister.

Modi is facing similar protests in India where protesters burn the effigies of PM Modi, leaders of his party BJP, and corporate bosses who are allegedly being helped by the Modi government unscrupulously.

The Al Jazeera report quotes protesters who said Modi’s policies go against the basic tenets of Bangladesh’s founding principles and “inviting India’s riotous, communal prime minister Narendra Modi to the golden jubilee of independence is against the spirit of the liberation war.”

Protesters said that BJP leaders’ derogatory statements about Bangladeshis and discriminatory policies of the Modi government have compounded the situation. 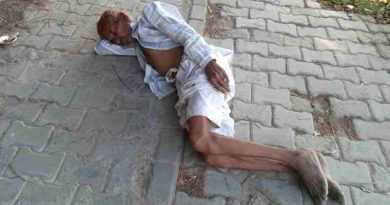