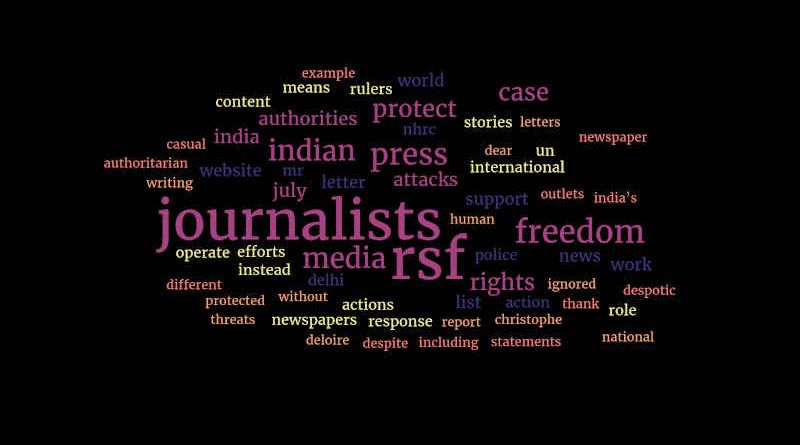 Subject: Do You Protect Press Freedom?

As a journalist, I have communicated with RSF before, as you have tried to protect me from death threats by writing letters to Indian ministers and others before publishing an article about my case on RSF website.

While your letters were ignored by the Indian authorities and the threats to me were increasing for my editorial and anti-corruption work, I approached the National Human Rights Commission (NHRC) of India to get my life and rights protected.

The NHRC has been directing the Delhi Police to take action so that I could be protected. The NHRC issued its latest notice on June 11, 2021 with the direction to the Commissioner of Delhi Police to investigate the matter and file its report by July 19, 2021. The case is in progress.

Although I thank you for your endeavour to highlight my case, I have experienced that despite your efforts, RSF is not doing anything effective that can protect journalists or ensure press freedom in different parts of the world, including India.

Unfortunately, RSF is only issuing some repetitive statements when journalists or media outlets are attacked by the despotic regimes. But all your screams are falling on deaf ears. Repeatedly. You must have realized that RSF is an ineffective outfit for authoritarian rulers who are hell-bent to harm and persecute journalists.

On July 22, for example, through a casual tweet RSF urged India’s ministry of home affairs headed by Amit Shah to cease the act of intimidation in the case of Indian newspaper Dainik Bhaskar. You know that such tweets are meaningless, but you still want to paste them persistently without making any impact on the governments that perpetrate attacks on journalists.

Similarly, your arm-chair reports about press freedom or attacks on journalists are ignored by the authorities.  Earlier this month (July 2021), for example, you had released a list of “predators of press freedom” in which you have named India’s prime minister Narendra Modi as one of the predators.

But see the effect of that list. Instead of decelerating its assault on journalists, the Modi government has accelerated its hostile actions against them. The invasion of the Dainik Bhaskar newspaper offices by the state sleuths is a manifestation of this hostility.

There is a likelihood that soon you will add such Indian newspapers in the RSF list of “murdered” newspapers, but this list will only find its place on the site for dumping debris. More attacks on newspapers and their staffers will keep happening.

I can count myriad instances where RSF has failed to live up to its self-proclaimed role of a press freedom defender. But that is not the purpose of this letter. Rather, I expect RSF to honestly admit that it cannot defend journalists’ rights and it cannot save their lives.

You must declare explicitly that RSF is only a small-time documentation setup which lifts stories of attacks on journalists and republishes them on its website or social media platforms. And you are using this insignificant job as a front to collect funds and stay in existence. The RSF work cannot be measured empirically, as I suppose you have never saved the rights and lives of journalists with your exclusive efforts.

Obviously, RSF is one of the many such outfits – such as the Amnesty International, Human Rights Watch, journalists’ associations, and a slew of UN agencies – which operate under the garb of press freedom protectors but could never protect press freedom.

In India, particularly, there is no entity or institution that can protect journalists and their rights. The Indian courts have lost their relevance while the police and security forces operate as gangs of criminals. As Indian politicians of all hues have lost their credibility, parliament debates have been reduced to a farce.

Worse, most Indian media outfits – traditional as well as digital – lack skills to operate cohesively, as they have failed to chalk out a common strategy to counter the government’s onslaught. These media outlets either ignore the incidents of attacks on journalists or publish loose, meaningless content on their media properties.

In contrast, the media organizations such as The New York Times, The Washington Post, CNN, and MSNBC in the U.S. played an important role through their impactful content to openly oppose another autocrat Donald Trump and oust him from power.

I cannot expect Indian media companies and journalists to reach that professional stature, as they continue to compile very raw and repulsive content which cannot influence the untamed Indian authorities which treat truthful journalists as their enemies.

In these circumstances, RSF should stop releasing the customary condemnation statements on state brutality or irrelevant reports on media freedom. Rather, RSF should be honest to admit that its work is not quite useful for media professionals.

I suggest that instead of doing some secondary reporting about harassed journalists, you should do something tangible which is visible and measurable. If your organizational efforts to influence the authoritarian governments are not delivering any results, this secondary reporting (news items and tweets) will also not serve any purpose for which the organizations like RSF are established.

Instead of writing these lifted news stories, you should publish the case studies of those cases where RSF provided end-to-end support to journalists to protect them and their rights. Similarly, you should create a consortium of lawyers / law firms from different countries who could provide pro bono legal support to the persecuted and threatened journalists.

RSF should also make a stronger interface with the UN agencies and international  political groups which can take immediate punitive actions such as trade and travel sanctions against the despotic rulers who harass the journalists.

Today, there is no mechanism that can save journalists from these cruel rulers. RSF will be failing in its objective if it can’t give concrete help to journalists. You would agree that RSF’s main objective is not to write news stories, but it is to provide direct help to journalists whose voice is being suppressed through fake cases against them or by intimidating or killing them.

I hope you will take immediate corrective steps to make RSF a relevant organization in the world which is going increasingly brutal against journalists.

I am available to extend any support that you may need.

Note: Since this is a digital document, please click the blue hyperlinks to understand various aspects of the report.

In response to this letter that I sent to RSF, I received the following email on July 23, 2021 from Daniel Bastard, the head of RSF’s Asia-Pacific desk.

Thank you for your interest in our organization. Our actions to protect press freedom across the world take many forms, including journalists’ assistance, media support, public and direct advocacy or international and national litigation action – i.e. all means that are non defamatory and non violent.

Among those means, and despite your impression, informing civil societies around the world about press freedom violations is a crucial aspect of our work. Fighting for press freedom means identifying and naming your enemy. This is what we do every day before engaging in advocacy and litigation, and obtaining results. For instance, RSF reported the case of endangered journalists in India to the UN, which lead several Special Rapporteurs to urge India’s government to take action.

As you mentioned, we highlighted your case both through a public dispatch and through a letter to the authorities. Even if you don’t see it concretely, we sent the message that Indian authorities are watched globally, and that they cannot go on despising the rule of law in your case. If we hadn’t done so, who knows how dire the situation would have become for you?

I remain at your disposal should you need any further comments. 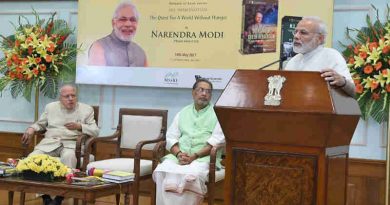 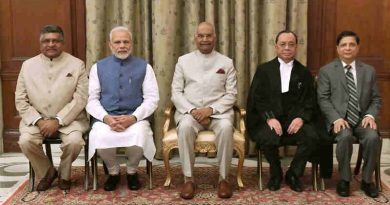 Gogoi to Modi: Increase the Number of Judges

June 22, 2019 RMN News Comments Off on Gogoi to Modi: Increase the Number of Judges