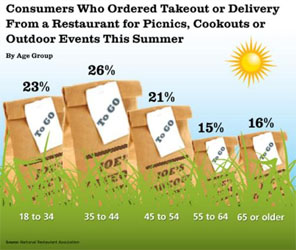 Food plays a central role in outdoor and vacation activities in the summer time, and new research by the National Restaurant Association shows that:

“The fact that one in five have used restaurant services for their outdoor dining activities, and that two-thirds enjoyed restaurant meals on summer vacations speaks to the essential role the nation’s nearly one million restaurants play in Americans’ lifestyles,” said Hudson Riehle, senior vice president of the Research and Knowledge Group for the National Restaurant Association.

“The summer months are typically the most popular time of the year to dine out, due to travel and tourism and outdoor dining activities. Restaurants have served millions of guests over the last three months, both in their establishments and with takeout and delivery options for picnics and cookouts in backyards and parks across America.”

The survey asked consumers about using takeout or delivery from restaurants for outdoor dining events this summer, such as Memorial Day or Fourth of July.

Consumers were also asked about which factor most influenced how they chose a restaurant for summer dining:

The survey asked consumers about how they picked restaurants while on vacation.

Founded in 1919, the National Restaurant Association is a leading business association for the restaurant industry, which comprises 960,000 restaurant and foodservice outlets and a workforce of nearly 13 million employees.

Have You Ever Been Coerced into Having Sex?

February 5, 2016 RMN News Comments Off on Have You Ever Been Coerced into Having Sex?