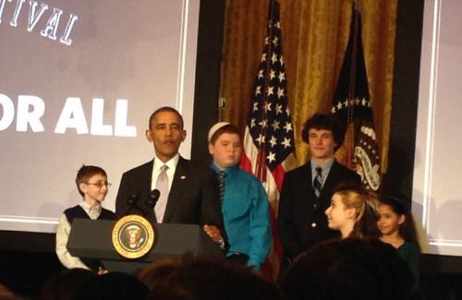 Gabrielle Nafie and Miles Pilchik, both 8, and their film Full S[T]EAM Ahead: How Technology Rocks the Classroom, were featured at the inaugural White House Student Film Festival, Friday.

The film, narrated by Gabrielle and Miles shows how SciTech Kids afterschool, weekend and summer programs are rocking the classroom with STEAM programming.

The kids along with Kim Magloire, president of SciTech Kids, created the three-minute film for submission.

In his remarks, President Obama, said, “You’ve got Gabrielle Nafie and Miles Pilchik from SciTech Kids in New York. They showed us that their class isn’t just dreaming about going into space, they’re actually going into space. They designed density experiments and used a 3-D printer to build tiny satellites to hold them. And then they actually launched a giant balloon that carried their satellites up to the edge of space – very cool – so they could collect the data. When I was in elementary school, I was not launching satellites into space.”

In November, the White House Student Film Festival announced a call for video submissions that highlight the power of technology in schools. Out of 2500 submissions, 16 films were chosen.

March 18, 2015 RMN News Comments Off on How President Obama Ensures Openness in Government