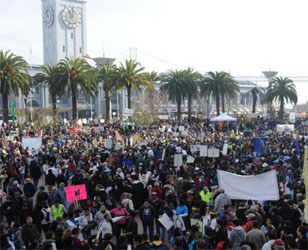 Tens of thousands of pro-life activists filled Justin Herman Plaza in San Francisco’s downtown and then walked 2.5 miles along the waterfront in a huge turnout for the 7th Annual Walk for Life West Coast.

“We are here to break the bondage of the culture of death,” Walk for Life co-chair Dolores Meehan told the crowd.

“If we care for the baby, we have to care for the mother and father,” said speaker Kathleen Eaton, who founded Birth Choice Clinics in Orange County after her own abortion.

The Walk was held on the 38th anniversary of the U.S. Supreme Court’s Roe v. Wade decision legalizing abortion.

“You are the new generation of the pro-life movement and I can tell you Planned Parenthood is shaking in their boots.”

“Nothing is too big for God to forgive,” said Mary Poirer, who told the story of her three abortions.

Rev. Brian Walker, who, with his wife Denise, chose to abort their child four months before their wedding, said he deserted his wife when she needed him.

“We’ve lost close to 40 percent of our population to abortion,” said Rev. Denise Walker, founder of Everlasting Light Ministries, referring to the high rate of African American abortions. “We must end this slaughter.”

A densely packed crowd of least 40,000 walked 20 across in a line that stretched over a mile. The Walk route started at Justin Herman Plaza in downtown San Francisco and concluded at Marina Green in sight of Golden Gate Bridge, said Walk for Life West Coast on Saturday.

Founded in 2005 by a group of San Francisco Bay Area residents, the Walk for Life West Coast’s mission is to change the perceptions of a society that thinks abortion is the answer. 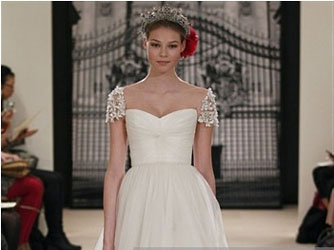 Do It Yourself Wedding Trends from Michaels

February 19, 2013 RMN News Comments Off on Do It Yourself Wedding Trends from Michaels