Bambi starred in the first Wildfire Prevention PSA in 1944, prior to Smokey Bear’s debut in the campaign later that year.  The new ads are being distributed to media outlets in the U.S. to coincide with Fire Prevention Week (October 3-9).

The Advertising Council, in collaboration with the USDA Forest Service, the National Association of State Foresters (NASF) and Disney, announced Tuesday (Oct. 5) the launch of a new series of PSAs designed to raise awareness about wildfire prevention.

According to Advertising Council, since 1944, Smokey Bear has been a recognized symbol of protection of America’s forests. His message about wildfire prevention has helped to reduce the number of acres lost annually by wildfires, from about 22 million (1944) to an average of 6.5 million today.

However, it says, wildfire prevention remains one of the most critical environmental issues.  Many Americans believe that lightning starts most wildfires. On average, however, 9 out of 10 wildfires nationwide are caused by people, says Advertising Council.

Created by Disney, the new television, radio, outdoor and web PSAs specifically target elementary school children and their parents and seek to continue to decrease the number of human-caused wildfires.

The PSAs feature Disney’s Bambi and his woodland friends as they teach children to “Protect Our Forest Friends.”

The PSAs direct audiences to visit the campaign’s website, www.smokeybear.com, where they can take a pledge and learn more about wildfire prevention.

While the new PSAs directly target elementary school children, Smokey Bear continues to encourage young adults to be proactive in preventing wildfires through his social media channels on Facebook, MySpace, Twitter and YouTube and through a series of online games and widgets featured on the sites. 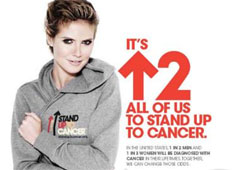 Heidi Klum Stands Up to Fight against Cancer

April 14, 2011 RMN News Comments Off on Heidi Klum Stands Up to Fight against Cancer