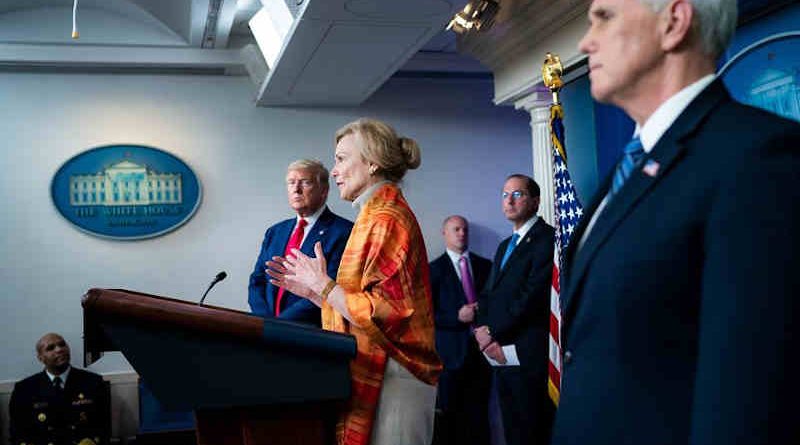 Trump is the only man who should be blamed, prosecuted, and imprisoned for crimes against humanity, as he has endangered the lives of millions of Americans and others in many parts of the world.

It appears that coronavirus (Covid-19) virus has already infected President Donald Trump’s brain as he has been behaving like a deranged man for the past few weeks.

In order to hide his own failures to control the contagion in the U.S., Trump has been repeatedly blaming the World Health Organization (WHO) for allowing the virus to spread in different countries.

Now, he has written a four-page formal letter to WHO Director-General Dr Tedros Adhanom Ghebreyesus, accusing his organization for its collusion with China to intentionally spread the virus.

Although in his vague letter Trump has not given any evidence of WHO’s involvement in the spread of coronavirus, he has indicated that China and WHO hatched a conspiracy to harm millions of people in other countries where the virus has reached.

This is the letter sent to Dr. Tedros of the World Health Organization. It is self-explanatory! pic.twitter.com/pF2kzPUpDv

At this stage, Trump has no other option but to blame China and WHO for increasing number of deaths in the U.S. while coronavirus has killed nearly 100,000 Americans in the past couple of months because of Trump’s arrogance and negligence.

Moreover, millions of Americans have gone jobless, as Trump kept ignoring the threat from the virus and said repeatedly that it will go away miraculously without any medical intervention.

Instead of taking advice from his health experts, Trump kept promoting lethal medicines and even poisonous disinfectants to treat the virus. This is not only insanity, but it is also cruelty.

As a result of his inaction and mishandling of the Covid crisis, Trump has lost support among Americans and is likely to lose the presidential election which is scheduled to take place on November 3, 2020.

In fact, Trump is the only man who should be blamed, prosecuted, and imprisoned for crimes against humanity, as he has endangered the lives of millions of Americans and others in many parts of the world.

Trump’s cruelty can only be compared to Adolf Hitler who led the Holocaust to murder millions of European Jews. Now, it appears that Trump – who is behaving as a secret foreign agent – will lead the 21st century genocide of Americans as he allowed the virus to infect nearly 1.5 million Americans. The number of cases is still increasing rapidly.

As a result, thousands died slow and agonizing deaths. This deliberate neglect corresponded with the German policy to cause the deaths of large numbers of Jews through over-crowded, squalid living conditions and a lack of reasonable medical care. In fact, Trump is using the same death model to kill Americans with coronavirus.

At present, the number of infected people and coronavirus deaths in the U.S. are significantly higher than what is being reported while only about 3% of the population has been tested.

Trump is not allowing tests to take place and pressing different agencies to hide the coronavirus cases so that he could reopen the businesses and hold election campaigns in different states in order to improve his chances of winning the election.

But if Trump is not arrested and imprisoned immediately, millions of more people will die because of his crimes against the people in the U.S as well as other parts of the world because he is trying to create impediments in the efforts of global health agencies such as the WHO.

Since the local U.S. lawmakers (Democrats as well as Republicans) are spineless, they will not be able take any action against Trump, as it has been seen in the past during his impeachment.

Therefore, like Iraqi president Saddam Hussein who was hanged, Trump’s case must immediately be handled by an international tribunal or the International Criminal Court (ICC) under charges of crimes against humanity.