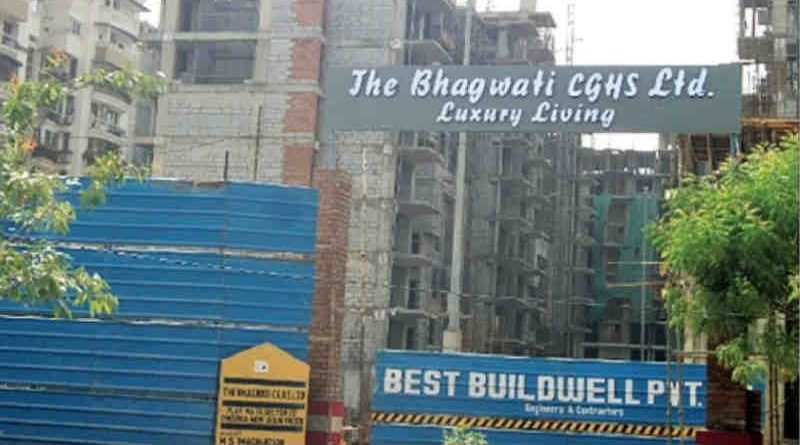 Today, almost all cooperative group housing societies of Delhi are controlled by corrupt management committee (MC) members who are committing all sorts of crimes in connivance with local politicians and bureaucrats.

The Bhagwati CGHS members have also been complaining for years that they are victims of corruption and fraud being committed by the Society MC members in connivance with the Registrar Cooperative Societies (RCS) of Delhi Government and Delhi Development Authority (DDA).

While the RCS office and DDA are among the most corrupt departments of Delhi, they have been ignoring the repeated complaints of the aggrieved members. It is alleged that the government officials have been bribed by the builder of the Bhagwati CGHS, which is under construction.

As a result, instead of helping the members whose money is being plundered in the builder-bureaucrat nexus, the RCS office has illegally expelled a number of members and DDA is allowing illegal construction in the Society building.

Since Bhagwati CGHS scam – which is said to be of Rs. 600 crore – is poised to rattle the Delhi Government, the government decided to discuss the issue in the Delhi Assembly.

The Committee on Petitions of Delhi Legislative Assembly called a meeting on 30.8.2018 to discuss the irregularities of RCS pertaining to Bhagwati CGHS. However, it is learnt that the meeting was postponed because the RCS office could not produce relevant papers.

On 10.9.2018, as the editor of RMN News Service I had approached chief minister Arvind Kejriwal and MLA Saurabh Bhardwaj who is the chairman of the Committee on Petitions to know the outcome of the meeting.

On 13.9.2018, the office of the Cooperative Minister Rajendra Pal Gautam sent my request to the Registrar (RCS) asking the Registrar to respond. However, the RCS did not respond.

While the administrative systems in Delhi have completely collapsed, recently Kejriwal – who is running a toothless government – had issued a shallow warning to bureaucrats that if they did not work properly, he will slap criminal cases against them. But still bureaucrats brazenly ignore Kejriwal’s directions and corruption is happening openly in government offices including the RCS office.

As Kejriwal and his government have completely failed to tame corrupt bureaucrats and criminal MC members of housing societies, millions of Delhi residents are suffering. Obviously, Delhi voters will not – and must not – vote for Kejriwal’s Aam Aadmi Party (AAP) in the upcoming Lok Sabha election and subsequent Assembly election.

Although Kejriwal government has brought the Bhagwati CGHS case in the Delhi Assembly, the RCS bureaucrats including Registrar Jayadev Sarangi may defy any order issued by the Committee on Petitions.

It has also happened before in the case of alleged Rs. 100-crore scam in the Delhi Nagrik Sehkari Bank when former RCS Registrars J. B. Singh and Shurbir Singh ignored the orders of the Delhi Assembly Committee which failed to catch them.

The Committee can even recommend jail term for corrupt officials of RCS office who protect corrupt MC members. Similarly, the corrupt MC members can also be jailed. But Delhi Government and its Committees have failed to stop corruption.

If you want to know how corrupt MC members and builders in a housing society commit various crimes and circumvent the law because of Delhi government’s weakness in stopping crime and corruption, you can study the complete case of Bhagwati CGHS.

Recently, Nitin Gupta – who runs a law firm Nitin Gupta & Associates (Advocates & Solicitors at Law) in Delhi – has also urged the Speaker of the Delhi Assembly to take concrete steps to weed out corruption from the RCS office of Delhi Government.

Nitin Gupta sent a detailed letter to Ram Niwas Goel, Speaker of the House Delhi Assembly, urging him to form a committee to investigate the large scale non-compliances and violations of the Delhi Cooperative Societies (DCS) Act 2003. He shared his letter with RMN News Service, which runs “Clean House” anti-corruption service that focuses on housing societies.

The increasing corruption and lawlessness in Delhi manifest the fact that India has already become a politically unstable banana republic such as Botswana, Guatemala, Nigeria, Zambia, and Cuba.

As corruption has been increasing exponentially in India including Delhi, the Supreme Court of India has asked the Narendra Modi government to appoint Lokpal, the top anti-corruption ombudsman in the country.

While the suffering members of Bhagwati CGHS have been running from pillar to post in order to seek justice, finally a member knocked on the doors of the Delhi Assembly.

Sudhir Kalra – a member of the Society – approached the Committee on Petitions of Delhi Legislative Assembly with his letter dated 07.09.2018 addressed to Committee chairman Saurabh Bhardwaj.

In his letter, Kalra has urged Bhardwaj to investigate the “unholy nexus” between the RCS office and the builder in the Rs. 600-crore scam in Bhagwati CGHS.

Kalra alleges that the RCS officials – now headed by Registrar Jayadev Sarangi – have shown intentional negligence of duty during 2002-2018 to give pecuniary gains to builder Sanjeev Malhotra of Best Buildwell Pvt. Ltd. who is running the fraudulently revived Bhagwati CGHS through a remotely controlled puppet management.

As a journalist and social activist, I have been helping the Bhagwati CGHS members get justice. I have observed that the members are not getting relief because they are not united. Only a couple of persons are fighting this battle to get justice for all the suffering members.

Therefore, I request all the members, who want to get their flats in the Society, to join hands with each other. The members who want to come together in this cause may fill in a simple online form to share their basic details. They will soon be contacted to discuss the future course of action and seek their support. The same online form is also provided at the bottom of this article where you can fill in your details.

You can click here to fill in the form.

In his letter, Kalra explains that the fraud has been happening at the cost of legitimate rights of the promoters and original members whose complaints (42 pending complaints) pertaining to irregularities have been kept pending or unattended by the RCS officials using manipulative tactics and many of the complaints have been made to disappear.

Thus, he adds, the RCS-builder nexus has deprived many original members of their legitimate right to own an apartment in the Society. “This has led to huge financial gains running into crores to the illegal builder / contractor, Sanjeev Malhotra. It is evident that the RCS officials were hand in glove with the said builder and got their share of loot from the Rs. 600-crore Bhagwati Housing Scam,” Kalra stated in his letter to the Delhi Assembly.

He adds that several communications were also sent to Registrar Jayadev Sarangi through official email (rcoop@nic.in), his personal email, and Whatsapp number, but these repeated communications were deliberately ignored by Sarangi. “This brings serious doubt on his (Sarangi’s) involvement in the above said matter,” Kalra lamented.

In his detailed letter to the Delhi Assembly, Kalra has given references of Directorate of Vigilance (DOV) inquiry and demanded a probe into the role of Anshu Prakash as the then Registrar of Cooperative Societies and now the Chief Secretary of Delhi along with all the RCS officials who are dealing with the Bhagwati CGHS case.

Meanwhile, Kalra has filed a complaint dated 11.9.2018 with the Delhi Police, as he alleges that he is being threatened by the builder for complaining against the Bhagwati CGHS fraud case.

The members also complain against DDA. While DDA – which has allowed illegal construction at the Bhagwati CGHS site – is said to be involved in this racket, the aggrieved members demand cancellation of the land allotment to the Society by the DDA as the land was allotted on the basis of false and forged documents.

The suffering members of Bhagwati CGHS allege that the contractor M/s Best Buildwell Pvt. Ltd. is blatantly committing fraud in connivance with the executive members (or management committee members) of the Society, and their complaints to DDA are not being heard.

In his letter dated 14.12.2017 written to the Director (Group Housing) of DDA, M.G. Sathya – an Asstt. Registrar of RCS office – quoted the CBI judgment and urged the DDA to take action.

It was stated in the said letter that two inferences can be made from the judgment of the Special Judge CBI – (a) fraudulent enhancement of freeze list from 150 to 300 members and (b) getting allotment of land to the Society from DDA at subsidized rates based on false and forged documents. But DDA did not take action and illegal construction continues.

However, in a letter dated 07.09.18, the office of the Chief Vigilance Officer (CVO) of DDA confirmed that it is ready to pursue the complaint against DDA officials for allowing illegal construction of 5-bedroom dwelling units at Bhagwati CGHS.

Most Delhi residents believe that government officials keep sending such letters randomly from one department to another just to hoodwink the innocent complainants. While the actual inquiries into officials’ wrongdoings never happen, bureaucratic corruption has been persisting.

Now, Bhagwati CGHS members demand the appointment of a cost committee to re-evaluate the project cost so that original members do not have to shell out Rs. 3 crore for a flat that should not cost even Rs. 1 crore.

They also demand forensic audit of the Society’s accounts from the date of its incorporation because as they say the accounts till date have been audited by the auditors in collusion with the builder. Moreover, they expect RCS office to reinstate all the expelled members of Bhagwati CGHS without any bureaucratic hassle.

If the Registrar Jayadev Sarangi did not dismiss the current MC and start the investigation, the affected Bhagwati CGHS members will be forced to go to courts in order to seek justice. If that happens, why do we need the careless officials in the government?

By Rakesh Raman, who is a national award-winning journalist and social activist. He is the founder of a humanitarian organization RMN Foundation which is working in diverse areas to help the disadvantaged and distressed people in the society. He also runs “Clean House” anti-corruption service that focuses on Delhi’s group housing societies.

Bhagwati CGHS members may fill in the following form. 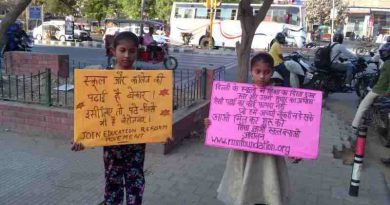