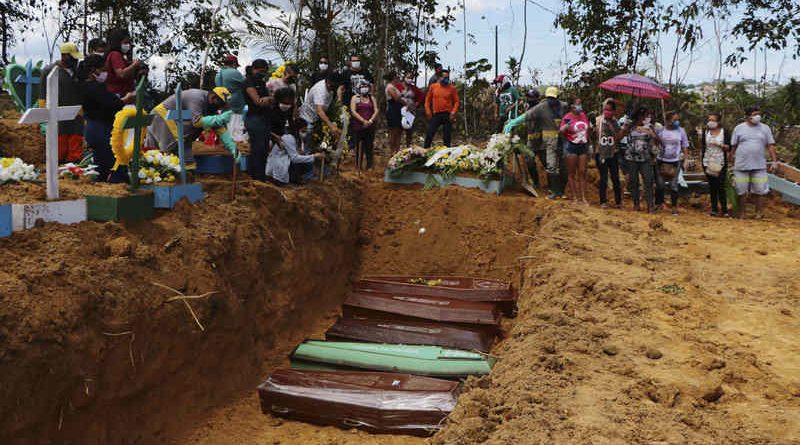 The launch of the probe is a major setback for Bolsonaro who is facing reelection next year.

Protesters continue to occupy streets in several cities of Brazil to demand president Jair Bolsonaro’s impeachment amid charges of alleged corruption and Covid mismanagement. On July 24, protesters gathered in São Paulo’s Paulista Avenue to hold demonstrations while Bolsonaro is already under investigation for his alleged involvement in the Covid corruption scandal.

As the investigation is progressing, on July 24, the National Health Surveillance Agency of Brazil, Anvisa, announced that it has scrapped Bharat’s Emergency Use Authorisation request. The Collegiate Board of the agency unanimously decided to close the process that dealt with the temporary authorization of emergency use, on an experimental basis, of the Covaxin vaccine.

Earlier, on July 23, Bharat Biotech said it has scrapped agreements with two Brazilian companies – Precisa Medicamentos and Envixia Pharmaceuticals – amid controversy over a $324 million deal to supply  20 million doses of Covaxin.

New reports reveal that a transaction of one million Brazilian reals ($2,00,000) by the Indian firm’s representative to the India-Brazil Chamber of Commerce (IBCC) is also under the scope of the investigation. Investigators are looking at the transfer of money to the Chamber just before the signing of the $300-million deal on February 25, 2021.

The launch of the probe is a major setback for Bolsonaro who is facing reelection next year. Polls indicate that former leftist president Luiz Inácio Lula da Silva will defeat Bolsonaro in the race.

Incidentally, Lula was convicted following an investigation into a bribery scandal, called Operation Car Wash. In March, a Supreme Court judge in Brazil had annulled his corruption convictions, giving him an opportunity to run for the presidency in 2022.

Lula, who ruled Brazil between 2003 and 2010 – was sentenced to 12 years in prison and jailed in April 2018 on charges of money laundering and passive corruption. He is the first President of Brazil who was arrested for corruption. On November 8, 2019, under the court decision, Lula was released after spending 580 days in prison.

BACKGROUND OF THE BOLSONARO CASE

However, not even a single dose of the vaccine was given to anyone in Brazil, as it was not approved by the Brazilian drug regulator or the World Health Organisation (WHO). According to the report, the deal between the Indian company and Brazil’s ministry of health, brokered by a local firm, has become the main focus of the parliamentary commission of inquiry (CPI), which is already investigating the handling of the Covid pandemic by the government of President Jair Bolsonaro.

As the Brazilian senators are suspecting massive corruption in the deal, they are treating it like a financial scandal involving 1.6 billion reals ($300 million) in the contract for 20 million doses, with each dose costing $15. According to newspaper Estado de Sao Paulo, Bharat Biotech initially quoted a price of just $1.34 a dose. But Brazil agreed to pay $15 a dose, more than any other vaccine it purchased.

Reports reveal that the request for payment for three million doses of Bharat Biotech’s Covaxin vaccine landed on March 18 on the desk of Luis Ricardo Miranda, head of medical imports at the Brazilian health ministry. There were several red flags, according to Miranda, who testified on June 25 before a senate panel investigating the government’s handling of the pandemic.

The target of the probe is Bolsonaro who was promoting “preventive treatments” like hydroxychloroquine and repeatedly downplayed the effect of vaccines. With the aim to surreptitiously allow the import of Covaxin in the shady deal, Bolsonaro questioned the efficacy of vaccines from Pfizer and delayed their acquisition.

Now the federal prosecutors are investigating if Precisa Medicamentos, the firm in the middle of the deal, was favored by the government in the purchase of Covaxin from India. It is reported that the probe agency has documents which show that Bolsonaro’s government aggressively pushed for a deal with Bharat Biotech. Bolsonaro, however, claims that Brazil never paid for or received any doses of the vaccine developed by  Bharat Biotech.

If senators formally accuse Bolsonaro of malfeasance, he could be tried in the Supreme Court and removed from office. Meanwhile, Brazil has decided to suspend the Indian vaccine contract.

Similar corruption scandals are being reported in India during the Covid pandemic. A local trader Ramdev – who has links with the present Indian government headed by Prime Minister (PM) Narendra Modi – has been leveraging coronavirus to expand his business unscrupulously.

As the Modi government has failed to contain coronavirus, it was reported recently that the government was promoting spurious drugs of small-time companies to treat the infection. According to reports, India’s then health minister Harsh Vardhan endorsed a product of Ramdev’s local outfit Patanjali, which falsely claimed that it is offering the “first evidence-based medicine for corona” approved by the WHO.