Although Trump has not yet revealed his roadmap to remove Biden and occupy the White House again, the possibility of a coup against Biden cannot be ruled out.

Joe Biden must be spending sleepless nights these days, as his predecessor Donald Trump has decided to come back as the U.S. president by August 2021. Reports suggest that Trump is discussing his plans with his clique to dethrone Biden in the next couple of months.

With the aim to prove that the November 2020 election was stolen from him by Biden and Democrats, Trump has already initiated an unauthorized process of audit of votes in Arizona, with the plan to extend it to other states where Trump lost to Biden.

A reporter of The New York Times Maggie Haberman, who specializes on all things Trump, has confirmed his aspirations, saying, “Trump has been telling a number of people he’s in contact with that he expects he will get reinstated by August (no that isn’t how it works but simply sharing the information).”

Although Trump has not yet revealed his roadmap to remove Biden and occupy the White House again, the possibility of a coup against Biden cannot be ruled out. In fact, Michael Flynn – a retired Army lieutenant general and former national security adviser under Trump – has indicated in a widely circulated video the possibility of a Myanmar-style military coup to topple the Biden administration. Earlier, Flynn was forced to resign after lying about his interactions with Russian officials.

CNN reports that the “talk of a Myanmar-style coup in the United States has been popular among some Trump supporters and QAnon believers for months.”

QAnon is a discredited American far-right conspiracy theory which suggests that a cabal of satanic, cannibalistic pedophiles run a global child sex trafficking ring and they conspired against Trump during his term in office.

QAnon is commonly described as a cult which believes that Trump has been planning a day of reckoning known as the “Storm” when thousands of members of the cabal will be arrested.

Trump has been telling a number of people he’s in contact with that he expects he will get reinstated by August (no that isn’t how it works but simply sharing the information). https://t.co/kaXSXKnpF0

In fact, Trump has already attempted a violent coup with the help of his violent supporters. After the November 3 election that Joe Biden won, Trump has been making false claims of election rigging. Provoked by Trump, a mob engaged with riot police on January 6 when Congress was holding a joint session to count the 2020 Electoral College votes to formally declare Biden’s victory.

The January 6 riot is being construed as an attempted coup by the insurgents incited by Trump with the aim to remove Biden who won the presidential election. Trump had asked the rioters to “fight like hell” against the November election results. Charged with incitement of insurrection, Trump was impeached by the U.S. House for a second time.

Meanwhile, a Yahoo News/YouGov poll reveals that 73% of Republicans blame ‘left-wing protesters’ for the January 6 attack and 64% of Republicans believe that the 2020 election was “rigged and stolen from Trump.”

Although Trump and the Trump Organization are facing criminal investigations, Trump is not deterred and he is getting full support from Republican lawmakers who are defeating all legal actions against him.

In normal conditions, no level-headed person would stand with Trump. But most Republicans are working hand in glove with Trump to save him in legal cases and also to challenge the election of Biden to get Trump reinstated.

In order to get this blind, unconditional support from top Republicans there is a possibility that Trump is blackmailing them. It is being conjectured that there are a number of dishonest politicians – who were earlier cursing Trump – are being blackmailed to support Trump’s idiosyncrasies because of their secret links with sex offender and Trump’s friend Jeffrey Epstein.

Although it is said that Epstein committed suicide in the jail, rumors also suggest that he was murdered with the fear that he might spill the beans about top American politicians. A few weeks before his death in July 2019, Epstein was found unconscious in his jail cell with injuries on his neck. A YouTube show sheds more light on the Epstein case.

If the Democrats and the American judiciary really want to know the reasons for Republican support for Trump, they will have to fully investigate Epstein’s death case, as he had died in mysterious circumstances. The investigation must reveal the names of all the accused persons transparently.

Meanwhile, two corrections officers accused of failing to keep watch over inmate Jeffrey Epstein the night he allegedly killed himself will avoid potentially serving time in jail by striking a deferred prosecution deal with prosecutors. Epstein, a former friend of ex-Presidents Donald Trump and Bill Clinton, was awaiting trial on child sex trafficking charges when he died in a Manhattan jail cell.

April 20, 2018 RMN News Comments Off on TIME Reveals 100 Most Influential People in the World 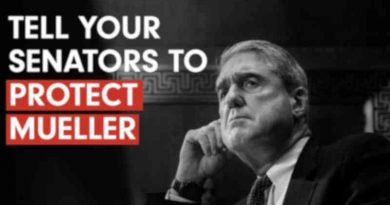