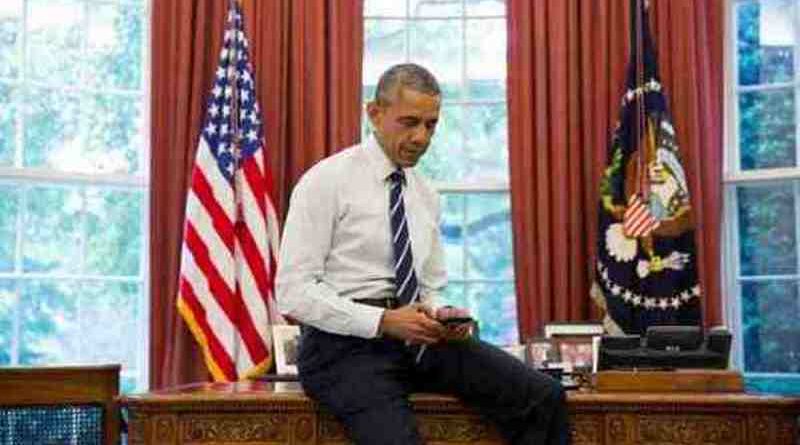 Many Americans have refused to accept Donald Trump as their future President, because of his repeated hate speeches against different sections of society and rude behaviour.

The U.S. President-elect Donald Trump took to Twitter instantly to retort that President Obama cannot defeat him in the presidential race if it happened.

Trump was responding to an assertion that Obama made Monday when he said he would have won against the businessman-turned-politician for a third four-year term as President. But the U.S. Constitution does not allow for more than two presidential terms.

“NO WAY!” Trump used capital letters in his tweet to emphasize his rejection to Obama’s claims.

President Obama said that he thinks he would have won against me. He should say that but I say NO WAY! – jobs leaving, ISIS, OCare, etc.

He blamed Obama for the joblessness in the U.S., rise of the Islamic State of Iraq and Syria (ISIS), and Affordable Care Act or ObamaCare enacted by President Obama in 2010.

Trump also added that the world was gloomy before he won and there was no hope. “Now the market is up nearly 10% and Christmas spending is over a trillion dollars!” he said.

The world was gloomy before I won – there was no hope. Now the market is up nearly 10% and Christmas spending is over a trillion dollars!

Meanwhile, Brian Fallon – a spokesman for Hillary Clinton – endorsed Obama’s claims by tweeting that Obama would have beaten Trump in the election. He also suggested that despite his win, Trump is a weak man and Democrats must join hands to oppose him.

I agree Obama would have beaten Trump.
I also think Clinton could have, but for Comey.
Despite his win, Trump is very weak. Dems must rally.

Although Trump has received majority of the 538 state-by-state electoral votes to win the presidency, his rival Clinton won 48.2% of the popular vote compared with 46.1% for Trump.

In order to challenge the election system, former Green Party presidential candidate Jill Stein, has approached the U.S. Department of Justice through her attorney demanding a probe in the election process.

Plus, many Americans have refused to accept Trump as their future President, because of his repeated hate speeches against different sections of society and rude behaviour.

Although Trump has managed to attract many Americans with his sensational rhetoric, most believe he is not fit to become the President because of his uncivil language and unstable thoughts.

People are now getting ready to protest and disrupt the Inauguration Day ceremony on January 20, 2017 when Trump is scheduled to begin his four-year term as President.

A leading filmmaker Michael Moore, for example, believes that Americans can still overturn the outcome of the U.S. presidential election that Trump won by defeating his rival Hillary Clinton.

The Presidential Inaugural Committee, however, is making all preparations to ensure a smooth ceremony. It has created a dedicated website for the inauguration.