MMS is an educated young – no, old man. After retirement, when he had nothing to do, he decided to become a Prime Minister (P.M.). He heard from one of his relatives that the queen was looking to appoint a good P.M. for her kingdom.

MMS didn’t waste any time. One fine morning, he reached queen’s palace at the capital of the kingdom. After a little effort, he was allowed in. As was expected, queen was sitting on the throne surrounded by servants of different shapes and sizes.

MMS bowed before the queen. Naturally. And before he could open his mouth to utter the first word, queen queries…

MMS: Dear queen, since I don’t have anything else to do, I thought this job will be a good pastime for me.

Queen: But you know this is the highest position in our kingdom. In fact, for decades, this has been reserved for our royal family members. But this time, none is available because they’re too young to hold this position. So, we thought to hire an outsider as the P.M.

MMS: Ah! That’s very good. And I can assure you I’m fully qualified and have the highest degree to become an insider from the status of an outsider.

Queen: Actually, in this job, degree is useless. None in our family had any good qualifications to rule the kingdom of this size. But we’ve been ruling here for years, you see.

MMS: Don’t tell me that queen. Qualification always matters in such positions.

Queen: Nah… Nah…Nah. Mostly, you’ll be dealing with illiterates – your colleagues, people in the opposition, and even the public – most are illiterates. So, where will your education be required?

MMS: Great. O’ queen, you’re great. How come, I never thought like you? You’re right, queen. Now, I understand that I only wasted my time in all my studies.

Queen: Well, tell me which games you’ve played in your school.

Queen: Oh, no. That won’t help. Have you played ‘Statue’?

MMS: Statue? Not really. But I’ve heard about this game. Why d’you ask this?

Queen: In fact, we want an experienced Statue player. Because this job will need a lot of that experience.

Queen: The P.M. would need to take the position of a statue when we ask for it. And come back to movement only when we say so.

MMS: I see. You need not worry ma’am. I’m sure I’ll be able to do it successfully. I won’t disappoint you. You can try it on me even now.

Queen: That’s good. Tell me something…

Queen: What’s your opinion on this corruption thing, as it’s a red-hot topic these days in our kingdom?

MMS: Sorry queen, I can’t say anything on this subject because I’m not corrupt.

Queen: That’s okay. But I wanna tell you the truth. We can’t survive without corruption, as it has become lifeblood of our kingdom. You will have to allow it to flow freely even if you’re not a corrupt man.

MMS: Sure, ma’am. I can understand your problem. You need to just guide me and when you say I’ll become statue and then corruption can continue as such. After all, what use has this Statue game otherwise? Hope you’re getting what I say.

Queen: Yeah…yeah. You’re right. We never thought you’re such a cunning man because you look like a bumpkin.

MMS: Ha…ha. Looks can be deceptive, ma’am. Thank you for your kind words for me. What else you want me to do? I’m at your service.

Queen: No, MMS. Don’t get me wrong but actually we don’t want you to do anything. You’ve to simply come here in the morning and go back in the evening without doing anything in the job.

MMS: Sorry, I didn’t get you. You mean I don’t have to do anything even for the public?

Queen: No. You need not care about any public. What can you do for one billion people who crawl everywhere like insects? Let them die their natural death.

MMS: You’re again right, O’ queen. Actually, I also don’t want to do anything. All through my life, I have been the most successful idle.

Queen: But before I forget, you’ll need to do a few things when you’re the P.M.

Queen: There are many terrorists in our kingdom. They keep killing people…

MMS: Yeah, queen. I’ve heard that your government is full of criminals and terrorists of different hues. I can…

Queen: Relax, MMS. We’re not talking about those internal terrorists. We know all of them. They’re okay with us. But now I’m telling you about the external ones.

MMS: Oh, I see. But please don’t ask me to go and fight with terrorists. I’m scared of them and…

Queen: Lemme complete, MMS. You don’t have to do anything. You’ve to simply give a couple of statements after every killing incident.

Queen: “We will not tolerate terrorism.” “Our neighbouring kingdom is behind these terror attacks.” That’s all. Nothing more, nothing less than this.

MMS: Ha…ha. I can do that. That’s simple. But queen, please don’t ask me to go at the place of incident. I’ll give these statements from my office – even a dozen times.

Queen: One more thing – you’ll also have to go to airport.

Queen: When kings and queens from other kingdoms come here, you need to go to receive them and later see them off. If you want, you can even take your wife along.

MMS: That will be real fun, ma’am. I never knew you’re so kind. And what about picnics?

Queen: Yes, we’ve thought about it. Every year, we will send you to other kingdoms at least half dozen times.

MMS: What will I do there?

Queen: Enjoy. Plus, we will give you a couple of more statements. You’ve to just utter them in those kingdoms with a serious look on your face.

Queen: Yeah, something like: “Our kingdom is an economic superpower” and so on.

MMS: But ma’am millions of people are starving and dying here. How superpower…?

Queen: Don’t think too much. You’ve to simply say this. Order is order. Okay?

MMS: It’ll be done ma’am. I can do whatever you say if you make me the P.M. You need not worry, revered queen. I’ll be the most suitable soul for your job.

Queen: I’m feeling that already. But we face opposition at every step. They’ll make your life miserable.

MMS: Never worry, queen. I’ll not only be suitable for you; I’ll be equally useful for them because mostly I’ll be lurking as a statue, as you just suggested. People in the opposition will never feel troubled.

Queen: MMS, lemme tell you something.

Queen: Your types will be kicked out from any other kingdom.

MMS: What are you saying…

Queen: But I think you’ve all the qualities of becoming a good Prime Minister here. Lemme show you your office – the P.M.’s office.

The characters in this show are fictitious and any resemblance to persons living or dead is purely coincidental. 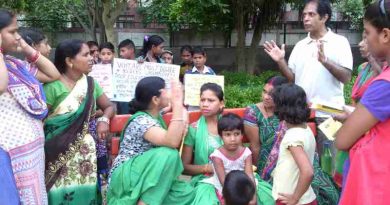 Appeal to Nominate Rakesh Raman as the Next UN Secretary-General

March 7, 2021 RMN News Comments Off on Appeal to Nominate Rakesh Raman as the Next UN Secretary-General

May Madness Begins with IPL Cricket in India

April 4, 2012 RMN News Comments Off on May Madness Begins with IPL Cricket in India

One thought on “How MMS becomes the Prime Minister”