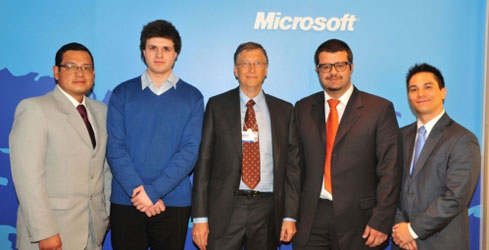 At the World Economic Forum Annual Meeting on Friday in Davos, Switzerland, Microsoft Corp. announced the winners of the inaugural year of the Imagine Cup Grants program, a three-year, $3 million competitive grant program for student technology and social entrepreneurs.

Grant recipients include Team Apptenders from Croatia, Team Falcon Dev from Ecuador, Team OaSys from Jordan and Team Lifelens from the United States. The teams invented solutions that address issues, such as accessibility, health and education, and use technologies that include Kinect for Xbox 360, Windows Phone, Bing Maps and more.

Winners of the grants were finalists at the Imagine Cup 2011 Worldwide Finals, a global competition now in its 10th year in which students use technology to solve the world’s toughest problems.

The Imagine Cup Grants program is focused on providing opportunities for young people by helping Imagine Cup competitors create a business or nonprofit to bring the benefits of their ideas to the world.

The grant packages include $75,000 (U.S.) for each team, as well as software, cloud computing services, solution provider support, premium Microsoft BizSpark account benefits and access to local resources such as the Microsoft Innovation Centers.

“The Imagine Cup Grants program showcases young people’s ingenuity, entrepreneurial passion and real potential to solve tough real-world problems,” said Brad Smith, executive vice president, Legal and Corporate Affairs, Microsoft. “Today’s young people will become tomorrow’s entrepreneurs, leaders and innovators and will build a better future for all of us if we give them the right opportunities.”

This year marks the 10th anniversary of Imagine Cup, which will be celebrated at the worldwide finals in Sydney, Australia, July 6–10. Students ages 16 and older are eligible to register and compete in Imagine Cup 2012 by visiting the Imagine Cup website at http://www.imaginecup.com.

In the picture above: Team captains from the Microsoft Imagine Cup Grants winning teams (from left) Gerardo Francisco Perez Layedra from Ecuador, Dominik Tomicevic from Croatia, Mohammad Azzam from Jordan and Jason Wakizaka from the United States pose with Bill Gates on Friday, January 27, 2012. The grant recipients joined Bill Gates for a roundtable discussion on opportunity for youth at the World Economic Forum Annual Meeting in Davos, Switzerland.

October 26, 2010 RMN News Comments Off on How IBM Plans to Help Mobile Workforce