If you throw a pebble out of your window, most likely it’ll fall on the head of a person peddling social media services in one form or the other. So, in the unruly social media market, there are perhaps more sellers than buyers.

Today, every Tom, Dick, or even Harry claims to be a social media expert while the buyers are clueless about this strange social animal.

So, where do we stand in the online social sphere? After my careful study of the market, I’ve realized that there’s hardly any expert in the fledgling social media marketplace while a slew of self-styled individuals and agencies are trying to fleece buyers with false promises on social brand communications.

If you’re planning to use social media for your brands, here are these five social media myths that you must know. The idea is to help you cut through the clutter and stay at a safe distance from social sellers.

1. Part of New Media: Social media is totally ineffective in an isolated form. It’s, in fact, part of a pervasive new-media canvas. Today, many public relations (PR) companies are trying to hoodwink their clients by selling social media communications as part of their PR services.

Similarly, social media agencies and traditional ad agencies are going berserk with random claims. But they don’t understand that simply creating pages or throwing article links on a social media site has no meaning at all.

2. Social Networking: The public social networks like Facebook, Linkedin, Twitter are fast losing their sheen. In fact, they’ve become colossal information junkyards where people are randomly throwing text, pictures, and videos in which others are hardly interested.

You may have thousands of people on your Facebook page or Linkedin group, but they’re useless if they just exist there as digital zombies without any interaction with your messages.

That’s why serious companies are creating their dedicated networks to interact with their consumers. For example, ‘Toyota Friend’ will use Salesforce Chatter, a private social network used by businesses, and will be offered, first in Japan, initially with Toyota’s electric vehicles and plug-in hybrid vehicles due in 2012.

3. Social Business: Social media communication can’t be just a peripheral activity for your business. Rather, it should have a dedicated team with fixed accountability to run it as an exclusive business process.

If you still want to use public social networks, you can use them. But don’t expect too much from them for getting brand communications support.

4. Engagement: While consumers’ engagement with your brand’s presence on a social media site is extremely important, the number of Likes on Facebook is the most misleading indicator while measuring social media impact.

Although many desperate outfits are trying to entice Facebook users with baits of different types, users forget about those pages after initially trying for the baits. Pizza Hut, Bacardi rum, T.G.I. Friday’s are among the recent examples that have enticed the consumers for getting their Likes.

Engagement can only be measured with the amount of consumer interaction on your social media page and the diversion of traffic from that page to your site. On-page interactions can be in the form of valid comments. And comments like “Ha ha,” “Hee Hee,” “Lol,” “Lolz,” etc. are not valid while majority of social media comments are useless like these.

You can simply discard any individual or agency that doesn’t give you a proper engagement analysis methodology while selling the social media communication services.

5. Messaging: It’s among the most important components of a social media strategy. Messaging is a totally specialized job. Most PR agencies and ad agencies don’t have messaging skills, which include engaging message writing, posting the right message at the right time, driving the message streams, message analysis, and so on.

Public social media sites are being used by herds of users just to add people to their networks, while there is hardly any useful discussion taking place through messaging. And some of the messages that carry junk characters such as “RT,” “@,” “#,” etc. are so repulsive that others tend to ignore them.

If you want to hire social media services, you should develop a right yardstick to evaluate the messaging capabilities of sellers.

All these are the perils of a market that is in an embryonic stage. In this stage, vendors try to bamboozle buyers with false claims and promises. The onus is on the buyers to gain sufficient knowledge before hiring any service that has not yet proven its utility in empirical terms. And social media service is one such service.

Avoid buying any such service from any of the companies if you’re not willing to create a dedicated in-house social media department in your organization. Social media, as an integral part of new-media communications, should be treated as a new business process to achieve your core business objectives. 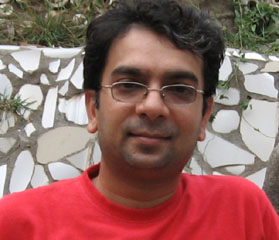 August 8, 2011 RMN News Comments Off on How LG Attracts Women in Social Media

Goby Sending a Postcard to the Boss

April 18, 2011 RMN News Comments Off on Goby Sending a Postcard to the Boss